The History of the Kane

Why Kappas Have Kanes

The use of walking sticks and canes may very well date back to centuries B.C. to the times when shepherds would tend to their flocks. This ties into the early roots of Christianity and leads to the candy canes of today being striped the way they are (3 thin stripes and 1 solid stripe) to remind us of the Father, Son, and Holy Ghost and the blood of Christ. The shape was believed to be chosen because the cane, if pointed upward, resembles the letter “J” for Jesus. The history of the cane also ties in with the African Rights of Passage, and was a symbol of manhood that had to be carried by initiates wishing to become adult members of their respective tribe.
Dealing more directly with the evolution of the cane and how it relates to the Fraternity, canes started off as assistive devices, and later turned into social status symbols for society. In the 1700s and 1800s, canes were a fashion embellishment. One “wore” a cane. These old canes were decorative, objects to be admired and be proud of. They became collectors items and represented the true sign of a Gentleman.
Members of Kappa Alpha Psi Fraternity have always worn or carried canes since the beginning of the Fraternity in 1911. Although unintentional in its inception, this occurrence soon became an unofficial tradition of Kappa men, as Kappa’s have always strived to be noble and productive members of the community. Members of the Fraternity then proudly adorned the cane, being the symbol of a Gentleman who exhibits such characteristics. 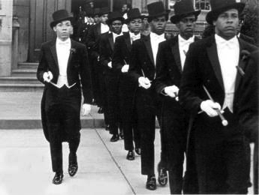 Earlier in the 20th century, new initiates of Kappa Alpha Psi Fraternity, Inc in Tennessee can be seen carrying their canes.

This type of display became commonplace up until the 1950s when Black Greek Letter Organizations, on an undergraduate level, began to practice what is known today as “Step Shows”. Undergraduate members of Kappa Alpha Psi Fraternity took part in the trade and soon incorporated the use of their favorite item, the cane, into the routine. This was something that spread to many undergraduate chapters during the 50s and 60s. Stepping was catching on at an accelerated rate among the African American fraternities and sororities during this time period.

It was not until the mid-to-later-1960s that the undergrads of Kappa Alpha Psi Fraternity began to decorate the step canes with the colors of the organization. The usual design was to pattern the cane with a crimson and a cream stripe from tip to tip which can be made out below in the photo. 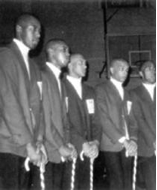 All throughout the 50s and 60s, canes used in the art of stepping were standard canes of approximately 36 inches in length, give or take half a foot. Eventually, as stated before, the canes would be adorned with the Fraternity colors of crimson and cream, but they were still standard length. Members of Kappa Alpha Psi would perform routines know as “Taps” where the canes would be beaten on the ground in time with the rhythmic beat of the step show.
The turn of the decade would reveal an evolution in cane stepping known today as “twirling”. Undergraduate members of Kappa Alpha Psi in the 70s, not content with Taps alone, would then create a new form of cane mastery which involved much more skill and talent than merely banging the cane on the ground in a certain beat. 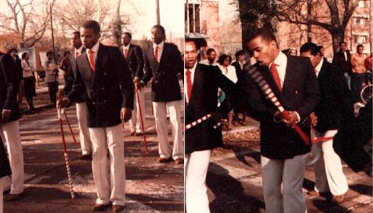 During the 70s, members of Kappa Alpha Psi Fraternity, Inc. began to "twirl" canes. On the left, the Traditional "Tap" is performed. On the right, the new "twirl" is performed.

Now that “twirling” had become the new style of cane stepping among Kappa undergrads, members were constantly searching for better and faster styles. One problem that Kappas faced during this time is that they were still practicing the step show routines using the standard sized, 3 foot canes which can be seen above in both photographs. Kappas widely found that while standard length canes worked fine for tapping, they became a hindrance when it came time to twirl. Thus, cane stepping evolved once again with the birth of the short cane, which can be seen below. 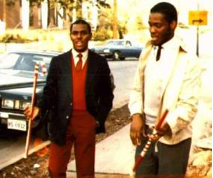 This new evolution of the short cane during the later 1970s has remained constant to this day, as can be seen in this recent photo of Kappas stepping. 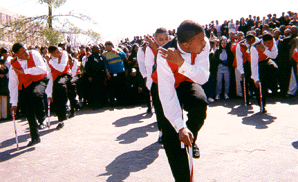 Members of the Kappa Beta Chapter of Kappa Alpha Psi Fraternity, Inc perform a step show at the University of Memphis in 1999. Note that the average cane is about knee high (approx. 2 feet).

Thus, the full-length cane, as well as standing straight up in order to perform a “Tap”, has been sacrificed, making way for twirling ability and speed.
Backtracking for a moment, a very important part in cane stepping history was the acceptance of this trade by the Grand Chapter of Kappa Alpha Psi Fraternity, Incorporated. All the aforementioned events have involved the undergraduate members of the Fraternity. However, cane stepping, even from its beginnings during the 1950’s, has not been considered an official part of Kappa Alpha Psi Fraternity, Inc. until as of late. The National Organization was slow to accept this as an official part of the Fraternity, even though undergraduate members, across the entire United States, were widely participating in the art and tradition of cane stepping.

These excerpts from The Story of Kappa Alpha Psi tell the National Organization’s viewpoint concerning the whole cane stepping issue: 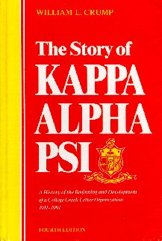 “Although cane stepping had become one of the most popular and well-attended activities on college campuses throughout the country, Kappa Alpha Psi was slow to accept this form of entertainment as a national activity. Earlier, Senior Grand Vice Polemarch Ulysses McBride had complained in the Journal about the vulgar language and obscene gestures sometimes engaged in by cane-stepping participants. Many complained of the profanity woven into the chants of the steppers and condemned what they considered ‘lewd and sexually suggestive gestures that accompany some routines.’ Critics further contended that the hours spent in step practices by chapters each week would be better devoted to academic or civic achievement. ‘I think it’s more important to honor scholastic achievement. I think the attention given to stepping should be placed into developing an honor roll or to recognize a group of Kappa scholars,’ was the opinion of Arthur Grist, a member of the East St. Louis Alumni Chapter and adviser to the Zeta Pi Chapter at Southern Illinois University.
The Journal reported: ‘what is undeniable, however, is the widespread popularity that stepping has attained. The avid attraction at college to stepping has caused shows to be propelled from mere performances in the school dance hall to such prominent forums as homecoming celebrations, civic auditoriums and fraternity province meetings. Step shows have become events that are frequently attended by parents and relatives of collegians.’
The Fraternity succumbed to the pressure and during the 66th Grand Chapter meeting in Washington D.C. (in 1986 – 75 years after the founding of the Fraternity), cane stepping was programmed as an official item on the Grand Chapter agenda.
Cane stepping became an official part of [Kappa Alpha Psi Fraternity, Inc. at the 66th Grand Chapter meeting in 1986] and a dazzling competition was held in front of hundreds of onlookers during a picnic in Washington’s Rock Creek Park to illustrate the skills of the trade. Several groups participated, performing frenzied and entertaining steps.” 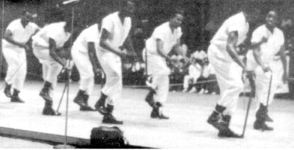 Members of the Beta Kappa Chapter of Kappa Alpha Psi Fraternity, Inc. perform in 1986 during the 66th Grand Chapter.

Now that the National Organization of Kappa Alpha Psi Fraternity, Incorporated openly embraced cane stepping, publicity of the old tradition was gaining and many television shows, T.V. commercials, and music video artists sought out to display Kappas stepping in their respective forums. One of the first national airings came about on February 2, 1989 when NBC chose members of Kappa Alpha Psi to perform a step routine on the Black college sitcom “A Different World”. Later, members of Kappa Alpha Psi could be found stepping in Brother Montell Jordan’s remix of “This is How We Do It” in the summer of 1996. Also airing in the summer of 1996 was another display of Kappas stepping in an episode of Fox’s “New York Undercover”. 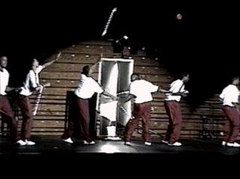 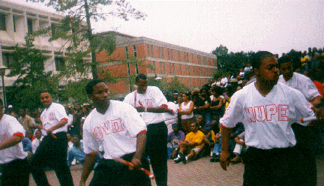 In konclusion, the tradition of the Kappa Kane has a longstanding history that reaches back as far the history of the cane itself, and sweeps forward with the introduction of Black Greek Letter Organization step shows, cane stepping, cane tapping, kane twirling, and finally the acceptance of this tradition as an official and integrated part of Kappa Alpha Psi Fraternity, Inc. which truly sets it apart from any other organization of its type.